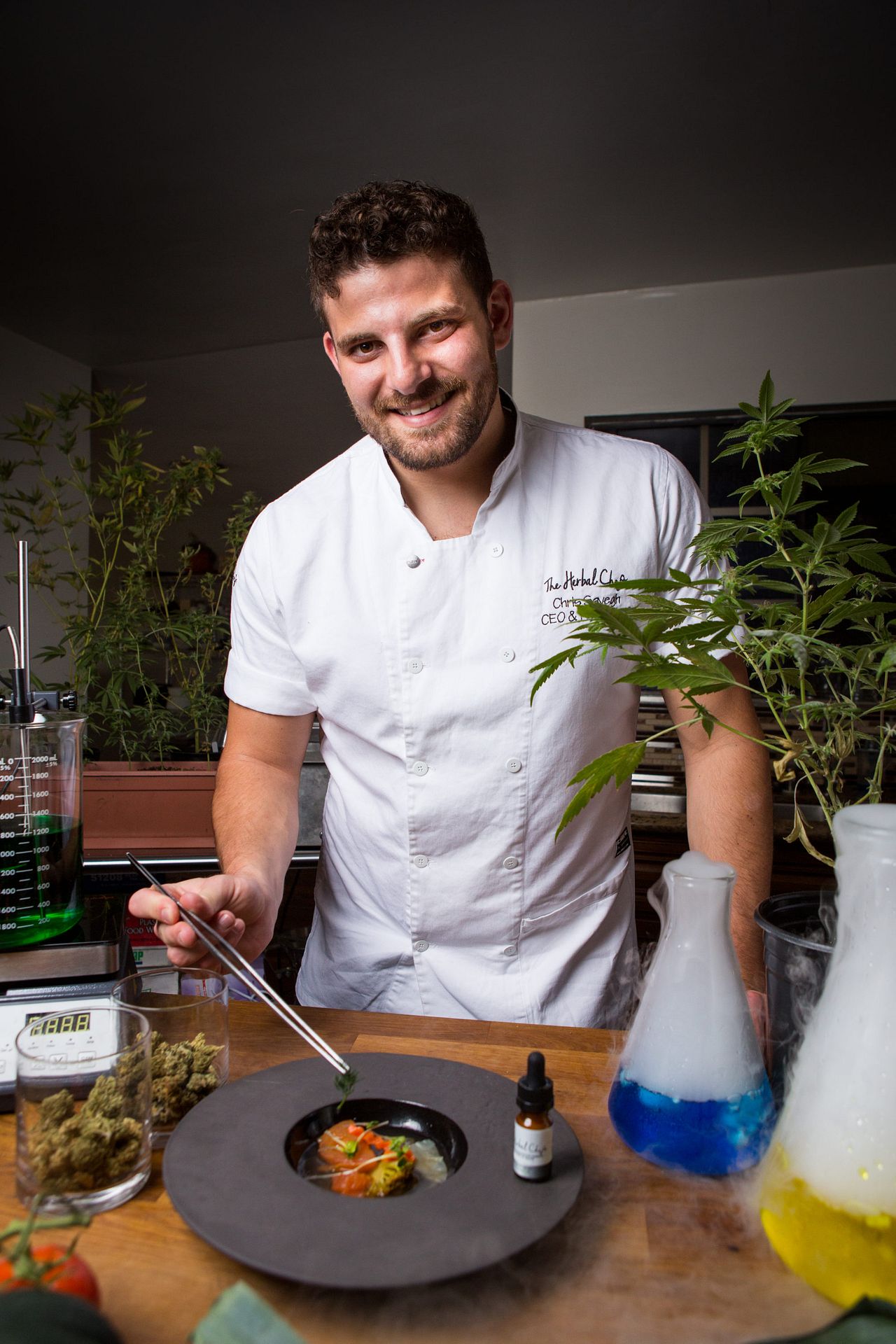 Recently we spoke with Chris Sayegh of The Herbal Chef about cooking with cannabis. He gave us some insight into what at-home chefs need to know about preparation and dosing. Below is our conversation.

If you were talking to a novice who was cooking at home [with cannabis], what would be one or two things you would tell them before they got started?

It’s about knowing the plant. There are three major components to the plant that I’ll be discussing. The tetrahydrocannabinol delta nine and delta eight are the psychoactive components. Or THC for short. Then we’re talking about the other cannabinoids, mainly CBD, which is the most prevalent cannabinoid. And that is non-psychoactive and it helps a plethora of different elements within the body. Then the third is terpenes. And these terpenes are the flavor and aromatic components of the plant. But they’re also found in many other plants and fruits. They are not specific to cannabis.

These three components comprise a hemp and/or cannabis plant. I’d say that cooking is fairly simple with CBD and THC and terpenes. But with THC, you just have to make sure how much of it you’re putting into your meal. The only way to truly determine that is by going to a licensed retailer and getting a product that is lab-tested.

With hemp CBD, you can order the stuff online. My favorite kind comes from CURED Nutrition. They have an exact amount of milligrams listed on the bottle.

During our dinners we have found a dose of 10mg THC to 10mg of CBD over a 2.5 hour period time provides our diners with the most pleasant experience possible. But it depends on what you’re trying to help within your body.

The whole reason that any of this works is because the cannabinoids, including THC, all work within the endocannabinoid system. The ECS system is the energy center of our body and it helps provide energy to all of our major organs. If our ECS system is nourished, we have a higher probability of going into homeostasis. And if we’re in homeostasis, then our body obviously runs more efficiently and can heal itself more efficiently.

The reason that people think CBD is the cure-all is because of how it interacts with the body. Because it is able to affect so many different major components of the body.

A lot of these products are $30 to $60, a bottle. How does one figure out how much to add to food so they’re not wasting money?

It really depends on what they’re trying to treat. My grandmother just had surgery, she’s having another surgery, and she takes about 40 to 50 milligrams a day. That is what is helping subside her pain. There is no “if you have this, you need 10 milligrams. If you have this ailment, you need 15.” Across the board, you need to learn what is going to be good for you. With CBD there’s no real side effect or risk in trying more or less of CBD.

But with THC we recommend starting really slow with 2.5 milligrams, and seeing how that affects you. After a few hours try slightly more than that, maybe five milligrams. This can be a weekly process in which you figure out what your dosage is, and where you’re the most comfortable between the milligrams in small increments increases, so that you don’t become overwhelmed by it.

With CBD, it’s really tough to say, because there are so many people that receive a benefit out of 10 milligrams and there are some that won’t receive the benefit that they’re looking for until they reach 30 milligrams.

It also has to do with the bioavailability, meaning the way that you ingest it. If you just take it sublingually, like you put it under your tongue, then that’s a great way to get it to enter your bloodstream quicker. If you have a dish that you’re putting it into, you want to make sure that you’re adding it at the end of the cooking process so that you’re not overheating the CBD and cooking it off.

That is the biggest mistake people will make — overheating the cannabis or the hemp.

Honestly, it’s not that complicated with CBD. You don’t have to follow the very strict algorithms and math in order to get everything correct.

But things like eggs that aren’t homogenized will be a bit more difficult. With those things you have to heat up a pan that is coming to a boil at or above 173 degrees. Anything above that is going to start deteriorating the cannabinoids.

I do definitely, because there are 162 cannabinoids currently, and I’m sure there are going to be more that come up. They all have an effect on the human body and they all work for us.

CBD is helping people feel safe while gaining an understanding of the plant. This is bringing the plant the mainstream media attention it deserves.

Have you recognized any trends in the people interested in cannabis and food? Is it younger, older, or more affluent? And has that changed over recent years?

Well, to be honest, our usual guest for dinner is not very projectable. We have such a wide array of dining guests with us that it is impossible for me to tell you a similarity between most people other than that they have a sense of adventure for food, and that they enjoy sensory experiences.

Outside of that, the occupations are wildly different and the age gaps are wildly different. We will serve people from 21 to 30. I’d say that our sweet spot is about 28 to 35, but we serve many people that are 50 plus. We even had a 90th birthday for a grandmother probably a month and a half ago.

It’s very, very unique in that sense. It really does attract many different ages and styles of human beings.

How did you come to this space? It’s probably a lot more accepted and mainstream now than it was five or 10 years ago.

When I first started there was nobody doing fine dining and cannabis. It was just a bunch of brownies and rice crispies. What I realized was that I don’t want to be putting medicine into something that’s not healthy in the first place.

That was what really sparked this change for me. I came at it from a science background, and really analyzed how I could create an experience that’s replicable. I built a proper business model that allowed me to slowly, with the help of food as a conduit, change the perception of cannabis through media and entertainment and food.

I believe that this plant deserves to be legal around the world, in order for people to put health back into their own hands as well as have a chance at financial independence. So that was the whole motive behind The Herbal Chef—to bring plant medicine to the forefront of human consciousness through food.

I take sublingual drops, and I find that the flavor is pretty strong. Have you found strains that you use that are less strong? Or do you just work with that in your cooking?

It’s really not by the strains anymore, because once you have a concentrate, the only way to differentiate is by the terpene profile. Essentially, what we look at is that bitterness, because it’s a very strong flavor. It’s bitter, it’s grassy, it’s earthy, and it’s very difficult to balance. If you have a hemp oil that is that strong in flavor, it balances well with acidity, with sweetness, and with boldness, which could be heat.

Typically tomato sauces are great for that. That’s one example. Cacao is great with it. That’s another example. Those things will help balance those very earthy and grassy flavors out.

I mentioned CURED, they have a few different products that have a really great flavor profile to them. But it really just depends on how and what you’re cooking. Because ultimately you don’t want to use so much that it’s overpowering the dish or wasting your product. You don’t need a whole lot of CBD in order to feel the positive effects from it. You can use it in moderation, have it not overpower the dish, and still get the same effects from it.