Home CBD Survey: How Many Americans Get High at Work?

How many people smoke weed on the job?

It seems that every day, new states or laws address the legality of marijuana, and the workplace has adjusted accordingly. As of 2018, at least nine states had begun to grant certain legal protections for marijuana’s medicinal use among employees. That said, these laws don’t necessarily protect employees who use the drug while on the job.

To find out how employees today incorporate marijuana into their working lives, we surveyed 1,000 people across the country, all of whom worked at least part time. They told us everything from their frequency of use to the locations they get high before and during their workweeks. Continue reading to see what we found – it may give you a new perspective on some of your co-workers’ and possibly even your own work habits.

High on the Job 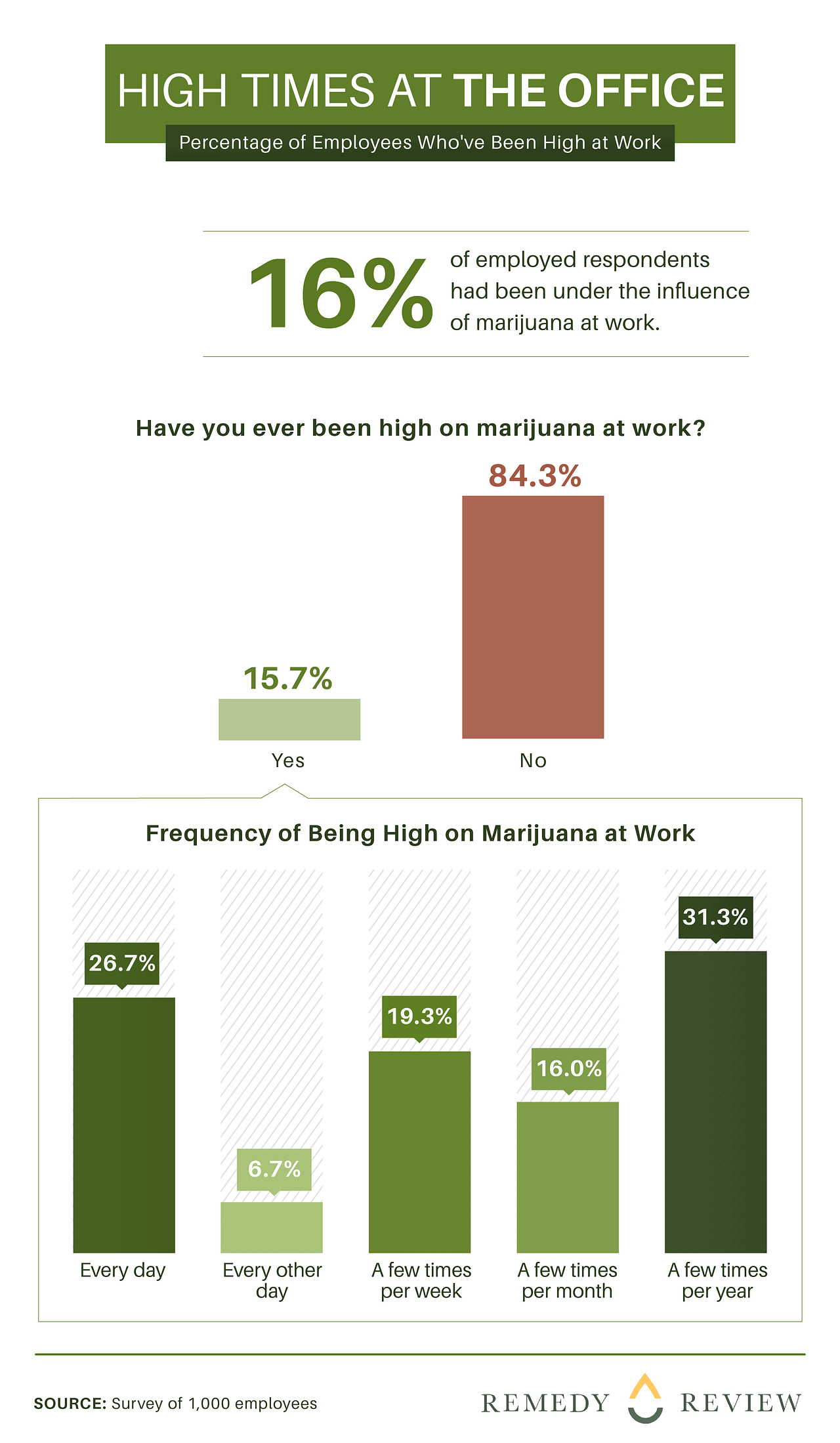 Sixteen percent of American employees admitted to being high at work. Although this number may not seem extreme, consider that this refers to being high while actually on the job, as opposed to after work or in general. Also consider that as states continue to legalize marijuana, both medicinally and recreationally, the number of employees who use the substance will most likely rise as well.

Moreover, the ability to do more work with a laptop from the comfort of home as opposed to an office may encourage recreational marijuana use. Depending on the nature of the job, being high at work can lead to different risk factors and consequences. 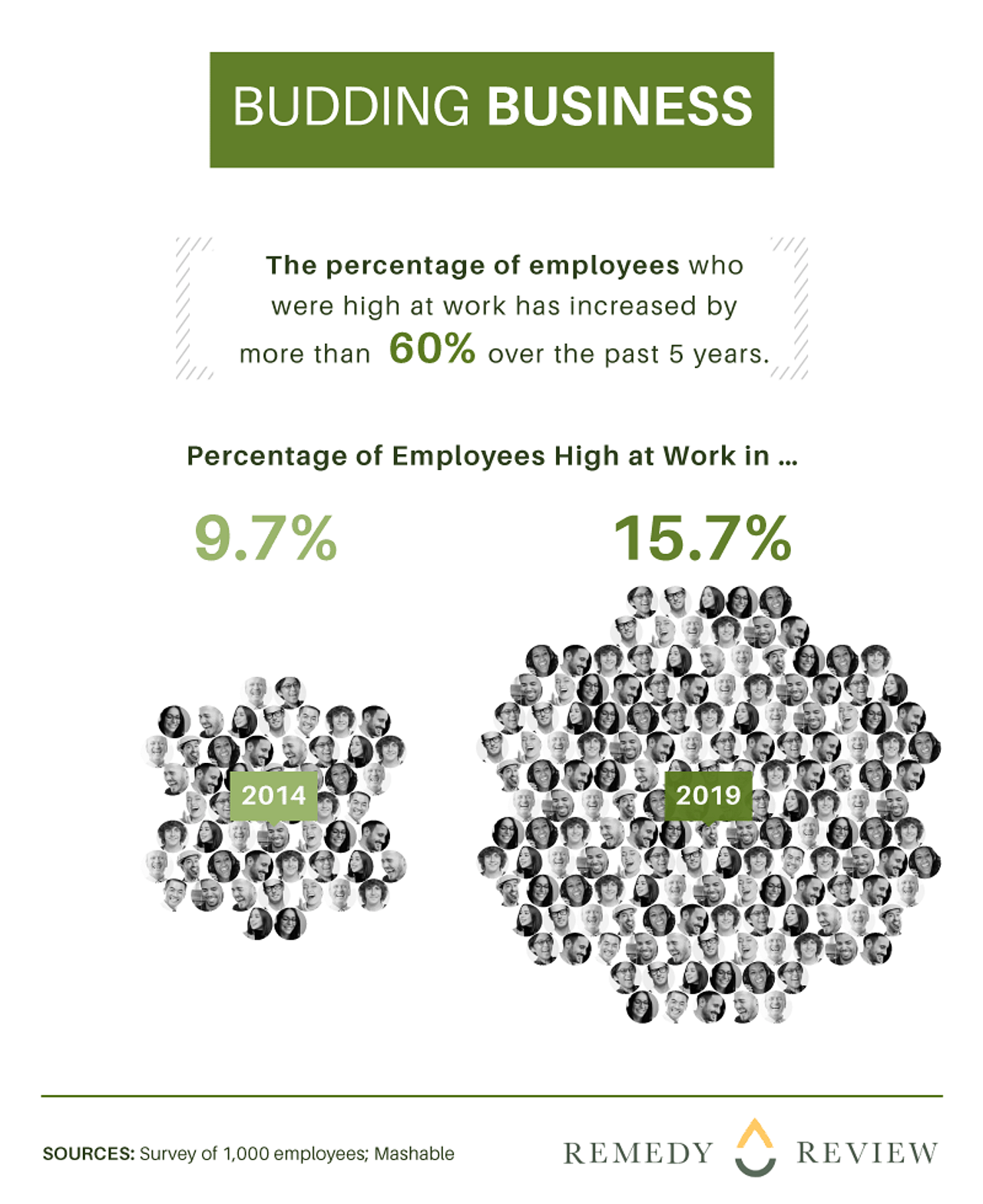 Although nearly 16 percent of today’s American employees have been high at work, this number was less than 10 percent in 2014, meaning there has been a 60 percent increase in the number of employees getting high at work in the last five years.

More recent studies also show that marijuana has truly become a mainstream substance. In 2017, 78 million Americans had reported trying the drug before. The legal marijuana market is also projected to become a $150 billion dollar market globally. Evidently, the boom in the American marijuana industry seeps into the workplace as well. The industry is projected to sustain more jobs than manufacturing by 2020. 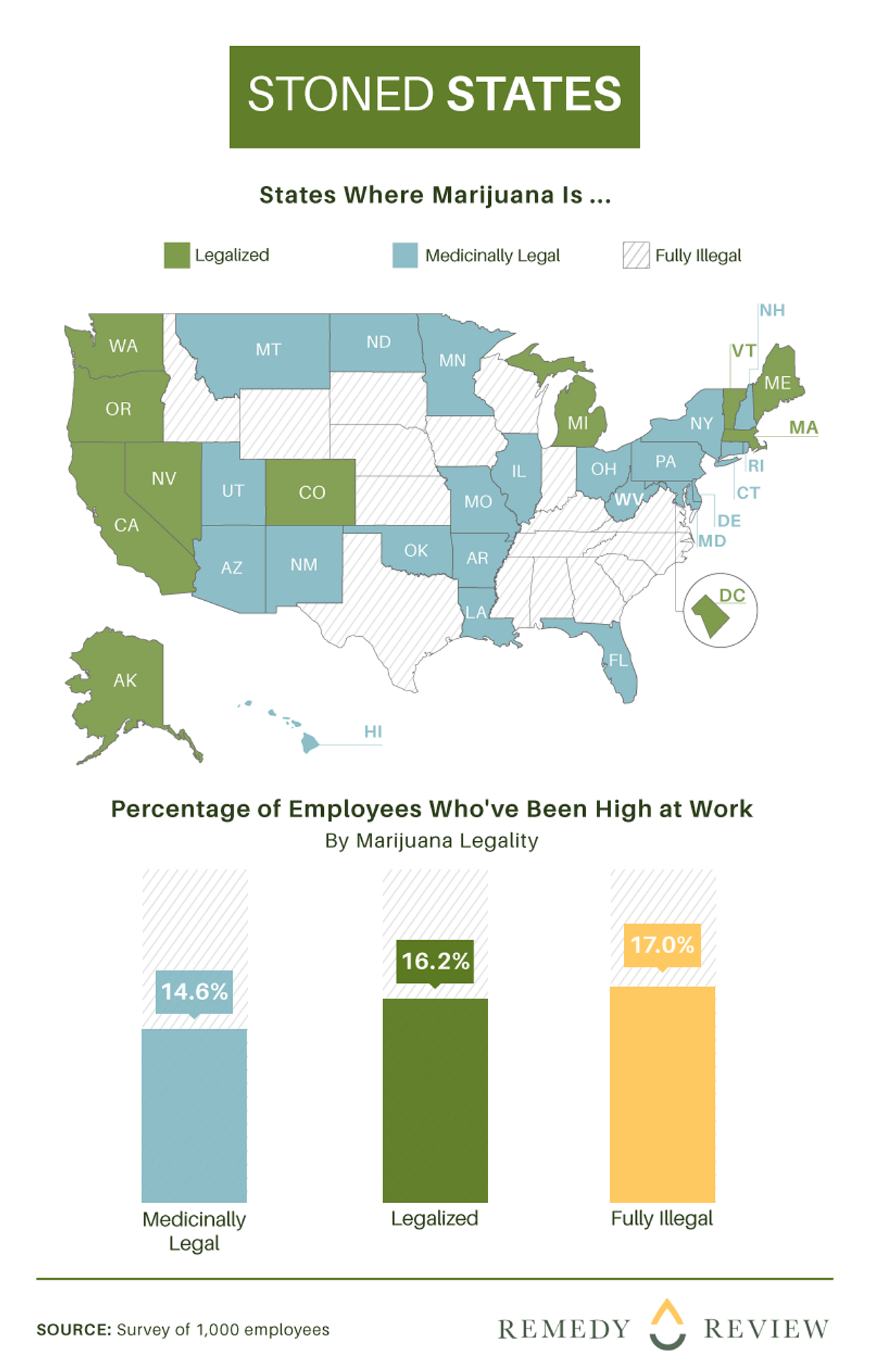 When marijuana becomes legal in any given state, it can mean one of two things: Medicinal marijuana is still illegal to use without a recommendation, while recreational legalization protects purely recreational highs. In 2012, Washington and Colorado became the first states to legalize the use of marijuana recreationally. Since then, nine other jurisdictions have jumped on the bandwagon, while many others have allowed its use for medicinal purposes as well.

In states where marijuana is medicinally legal, 14.6 percent of employees admitted to being high at work. In states where it is fully illegal to use marijuana, 17 percent admitted to getting high while on the job. This may, however, be due to the fact that disproportionately more states still consider marijuana to be illegal, as demonstrated by the areas shaded in gray on the map above. The areas shaded in green, which represent fully legalized marijuana use, are also outnumbered by states that still require prescriptions for medicinal use.

The Nature of the Industry

Although some people might be apathetic to their local telemarketers spending time under the influence, they would probably feel differently if it were their medical doctor or even their Uber driver. Fortunately, respondents in the medical and health care industries were high at work less often than any other industry. Still, almost 6 percent of medical and health care employees admitted to being high on the job.

Who was high at work the most often? Hotel, food services, and hospitality respondents. A whopping 35 percent of these employees said they had been high on marijuana during work. For some, part-time restaurant and hospitality jobs may not relate to workers’ future goals, so smoking at work could feel less consequential.

Overall, 21.2 percent of blue-collar workers admitted to being high at work, compared to 12.1 percent of white-collar employees. Perhaps even more surprising is that nearly half of employers still require drug tests, even amid changing laws.

When working from home, remote employees can enjoy life without visual supervision. In turn, these remote workers also incur far smaller risks when smoking at work. Seventeen percent of remote employees said they had been under the influence of marijuana while working.

With job safety potentially on the line with confirmed drug use, the reasons for getting high at work are worth examining. Surprisingly, the No. 1 reason for using marijuana on the job was to be a better worker: 38 percent of employees who used it said it was to boost their productivity. While marijuana can impair thinking, memory retention, and organizational skills, boosts in worker productivity are still possible in many cases. Marijuana’s ability to reduce both physical and emotional pain can lead those ingesting the substance to be more productive. In fact, 25.3 percent said their job also required intense focus.

The second biggest reason for using marijuana on the job, however, was to feel the day go by faster. Thirty-six percent of employees who were high at work said doing so helped to pass the time. While many employers have repercussions for marijuana use at work or failing a drug test, less than 10 percent said their decision to get high was because they didn’t care about their job.

Where the Weed Is 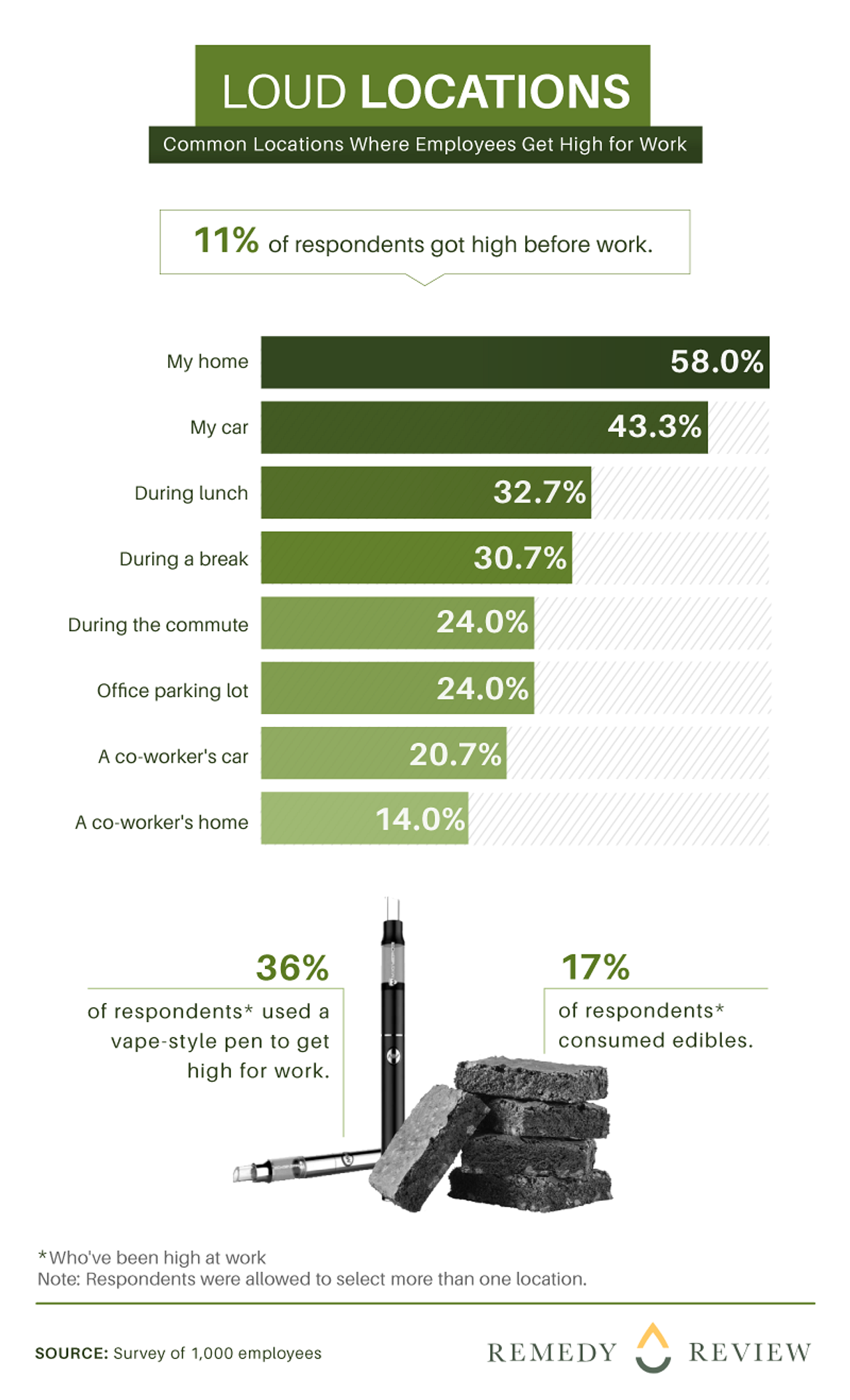 Of all respondents who admitted to being high at work, 11 percent said they did it before work even started. Fifty-eight percent said they used marijuana from the comfort and privacy of their home. Some chose to cut it even closer to clock-in time, with 43.3 percent choosing to get high in their car, and 24 percent did it during their commute. It’s important to remember that it is still illegal in every state to be under the influence of marijuana while operating a vehicle.

Making their way further into the workday, 32.7 percent of employees who got high during work chose to do so on their lunch break, and another 30.7 waited for regular, often shorter breaks. Nearly a quarter didn’t venture far from their office building and got high right in their office parking lot.

After hearing just how frequently employees and industries get high at work, you may already wonder how many survey participants were high during this study as well. At the end of the study, we asked respondents if they happened to be high as they answered these questions about work, and 8 percent said yes.

Ever since Colorado and Washington legalized marijuana, other states have followed suit, both medicinally and recreationally. With modern American employees adapting to these new laws and social norms, the workplace is changing as a result. A 60 percent increase in workplace marijuana use has occurred since 2014, and office parking lots now frequently host smoking sessions.

Individuals should make sure to use their best judgment when it comes to understanding how marijuana impacts their potential job performance and safety. Office culture, location, even industry and roles all come into play. When in physical pain, in a state of anxiety, or even on a particularly slow day, many employees may take refuge in the use of marijuana. So long as safety remains paramount, and you follow your local rules and regulations, the decision to engage or abstain from marijuana is your own decision.

For this analysis, we harvested responses from 1,000 people by launching online surveys through Amazon’s Mechanical Turk. To qualify for this survey, participants had to pass a round of screener questions pertaining to the study. All participants were employed – in some capacity – whether full time or part time. Participants who selected unemployed or retired as their current employment status were disqualified. Additionally, an attention-check question was used to identify and disqualify respondents who weren’t paying attention. Some questions and answer choices may have been bucketed and relabeled for clarity. Industries that failed to meet a minimum sample size of 26 respondents were not included in the industry-related subsets.

Of the 1,000 employed individuals that were polled, 64.1 percent identified as millennials, 8 percent were baby boomers, and 26.2 percent belonged to Generation X. The remaining 1.7 percent were a part of Generation Z or the silent generation. Furthermore, 46.5 percent of respondents were women, and 53.5 percent identified as men. The participants surveyed ranged in age from 18 to 75 with a mean of 36.

To determine the change in productivity levels among respondents who had been high at work, we had survey takers rate the productiveness at work when sober and then to rate their productiveness while high at work. They were presented the following scale for both questions:

To calculate the increase of employees being high at work over the past five years, we compared our 2019 survey findings to that of Mashable’s and SurveyMonkey’s 2014 study, which found that nearly 10 percent of employees went to work under the influence of marijuana. The difference between the two polls is that our analysis surveyed 1,000 employed respondents, whereas their study only had around 534 survey takers.

The main limitation of this analysis is that the findings are based on self-reported data via a questionnaire. There is an abundance of issues associated with these data such as, but not limited to, exaggeration and telescoping. Statistical testing was not performed on the claims made in this study, and this content was created for entertainment purposes.

Are you working while high? Marijuana might not be legal where you live or work, but sharing this article for noncommercial purposes is. You just have to be sure to link back to this page so that its contributors can receive proper credit for their work.