Smoke shops, dispensaries, vape shops, head shops – no matter what you call them, they’re no longer on the cultural fringe. Erase the image of a seedy den of curiosities from your mind, and replace it with a modern retail store that could just as easily be peddling sleek smartphones or tablets.

As legal marijuana is slowly but surely finding its way into the mainstream, the modern pot shop has begun to provide a full-blown brand experience. And while the adoption of pro-marijuana legislation is still in its infancy in the U.S., cannabidiol (or CBD oil) is essentially available in all 50 states.

This substance, derived from the cannabis plant, is marijuana’s non-psychoactive cousin, making legalized consumption much more palatable to state-level authorities. There are many benefits of CBD oil, which has been known to help treat certain disorders including pain and anxiety. The compound has also made its way into a number of common goods, including everything from CBD coffee to CBD dog treats.

Given CBD’s growing popularity, we wanted to learn more about the CBD retailers that operate across the country. Where can you find the best-rated shops? What about the cheapest products? Which markets are ripe for the picking? We scraped Yelp reviews from the 1,000 most populous cities in America to answer these questions and more. 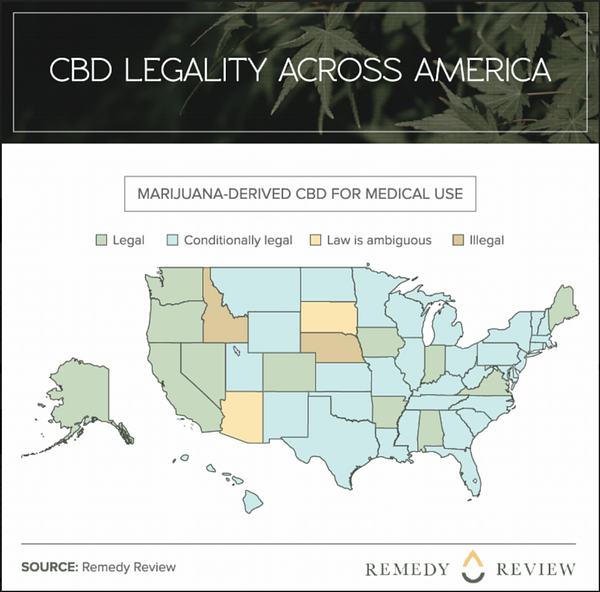 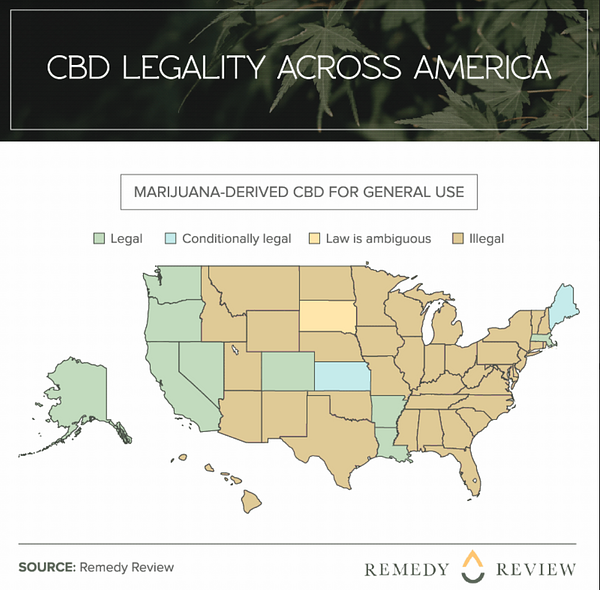 CBD is derived from either hemp or marijuana, the former being much more widely accepted across the U.S. Every state aside from Nebraska and Idaho has made hemp-derived CBD completely legal (and in those two outlier states, the laws are ambiguous). However, the level of acceptability that each state exhibits toward marijuana-based CBD is much more nuanced.

First, it is important to note that American drug legislation is much more lenient when it comes to using marijuana for medical purposes versus recreational consumption. This tolerance manifests as different regulatory standards for different states, from dispensaries to at-home cultivation. Overall, Nebraska and Idaho are the only two states in which using marijuana-derived CBD for medical purposes is illegal. Arizona and South Dakota’s laws are ambiguous, and a host of other states from Montana to Florida have conditionally legalized the substance.

When it comes to recreational marijuana, public opinion has come a long way: 64 percent of Americans are now taking a pro-legalization stance. However, in a majority of states, consuming marijuana-derived CBD for general use is illegal – although it is conditionally legal in Kansas and Maine.

Among cities that have at least five CBD shops with at least 10 ratings per establishment, Florida was home to the three highest-rated CBD shops. Pompano Beach, Margate, and Oakland Park were all gold-standard CBD cities according to our research, with an average dispensary rating of 4.9.

Of the ten cities that turned up the lowest-rated dispensaries in the country, New Jersey accounted for seven of those slots: Shops in Elizabeth, Hoboken, Newark, Paterson, Clifton, Passaic, and Hackensack all gleaned average scores of 3.5 and under.

As of March 2018, doctors in this state have been able to recommend medical marijuana to their patients to help treat anxiety disorders, chronic pain, and Tourette’s syndrome. Given that New Jersey’s marijuana-derived CBD program is currently still in its infancy, it is possible that local dispensaries will find their footing in the months and years to come.

Cities with the most CBD dispensaries per capita tended to be located in states that had legalized marijuana. California accounted for four out of the five top cities for CBD shops.

Beaumont, a small Californian city that’s just under 80 miles outside of Los Angeles, topped the list with 32 shops operating within its modest footprint. Montebello, located on the outskirts of LA’s city center, had 28 dispensaries. Sandwiched between these two Golden State cities was Littleton, Colorado, with 29 locations, accounting for the second-highest volume of CBD shops per capita.

While the rise in popularity of CBD retail locations in California has not been without its share of obstacles, vendors have been able to set up shop with relative ease: vendors don’t currently need a state license to open a dispensary. This makes it even more important to do your research before you buy. There is no shortage of shops popping up that are selling unregulated products, making it almost impossible to know exactly what you’re buying.

Ripe for the picking 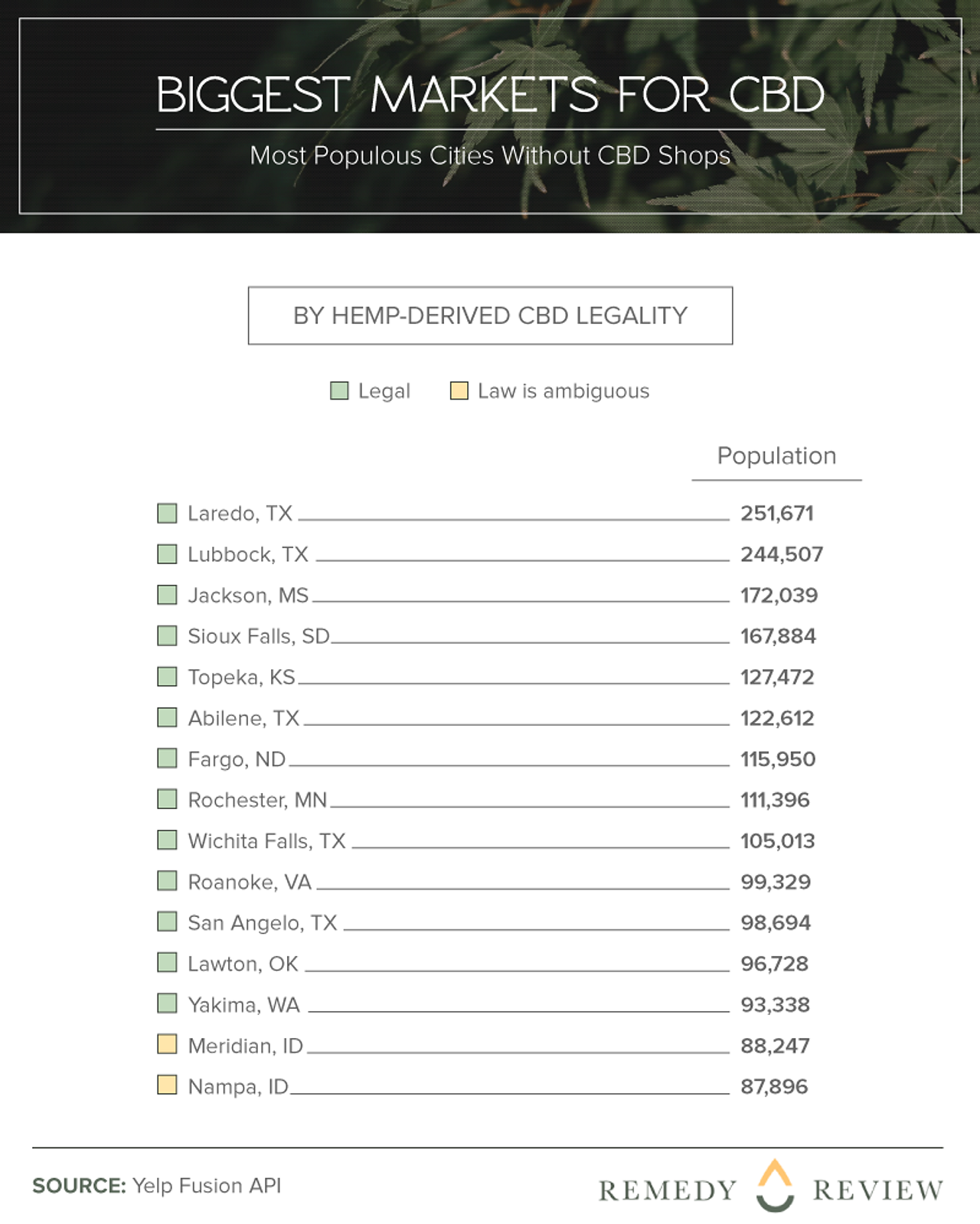 In addition to the legalization of marijuana on a federal level being far from imminent, the widespread adoption of CBD and the opening of retail shops is nowhere near its peak in states that have already legalized the substance.

Marijuana is still illegal in Texas, but thanks to 2015’s Compassionate Use Act, Texans with a certain form of epilepsy are cleared to use low-THC CBD oil to help ease the symptoms of their condition. The largest CBD-friendly city without a dispensary is Laredo, Texas, followed by Lubbock, Texas: The former has over 251,000 inhabitants and the latter at nearly 245,000.

Mississippi also permits the use of CBD oil–for the same type of epilepsy as Texas. Jackson, Mississippi, was the third-largest untapped market in the country, as a city with 172,039 residents and zero CBD retailers to serve them.

No other Mississippi city made this list, although we did discover markets that were fresh for the picking in states like South Dakota, Oklahoma, and Washington, the last of which has legalized recreational marijuana. 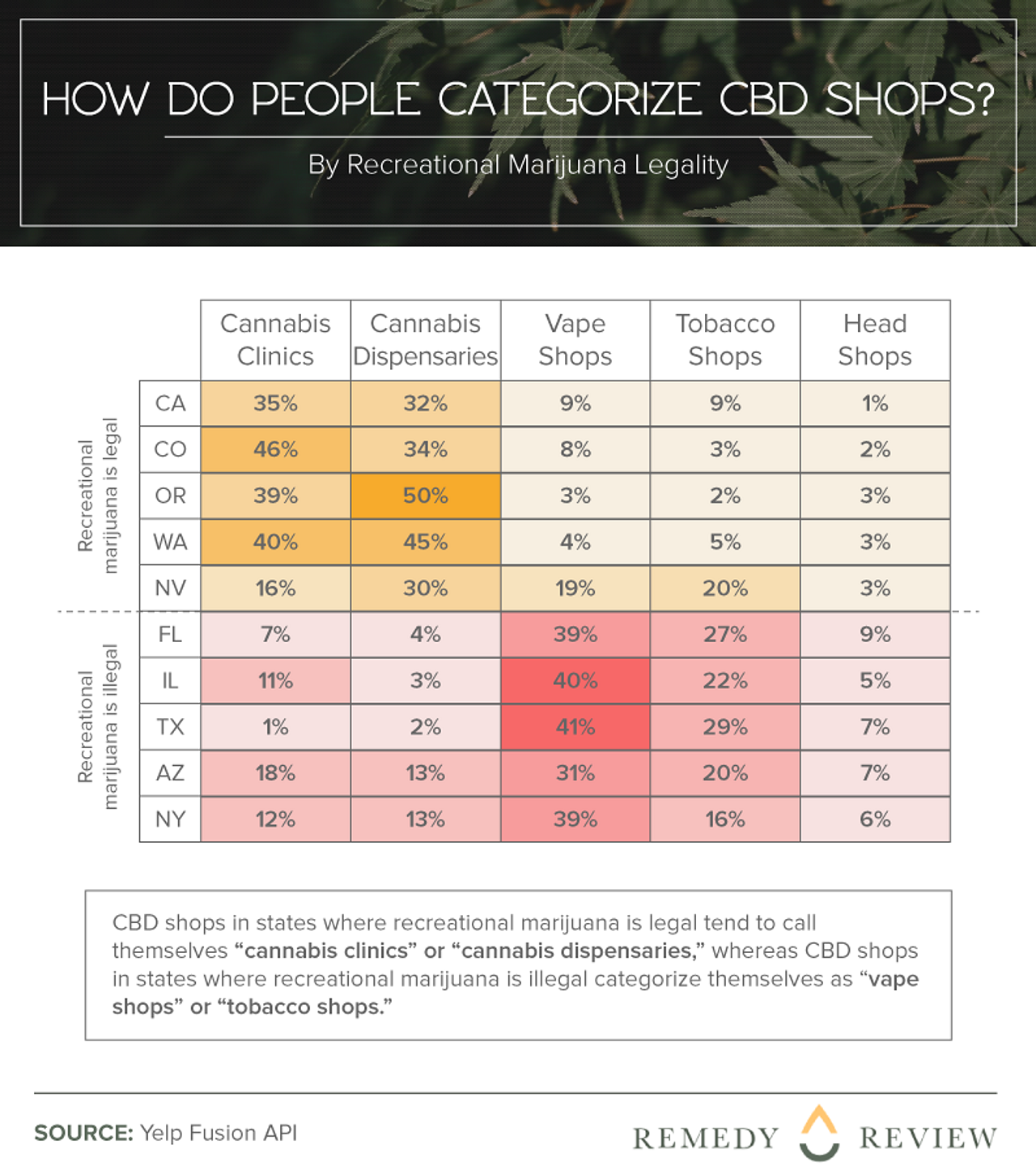 The monikers assigned to CBD shops vary across the nation. Interestingly enough, the four states that used the terms “cannabis clinic” and “cannabis dispensary” far more frequently than any other location–California, Colorado, Oregon, and Washington–have all legalized recreational marijuana. The first two favored the term “clinic,” whereas the latter two had a higher prevalence of “dispensary.”

Understandably, states that still have laws prohibiting the consumption of recreational marijuana avoided using the term “cannabis” to define their retail stores. “Vape shop” was the most popular option in states like Florida, Illinois, Texas, and New York, with just about 40 percent of locations bearing this name. “Tobacco shop” was frequently seen in Florida and Texas, although not as much as “vape shop.” No more than 9 percent of establishments per state dubbed themselves as “head shops.” 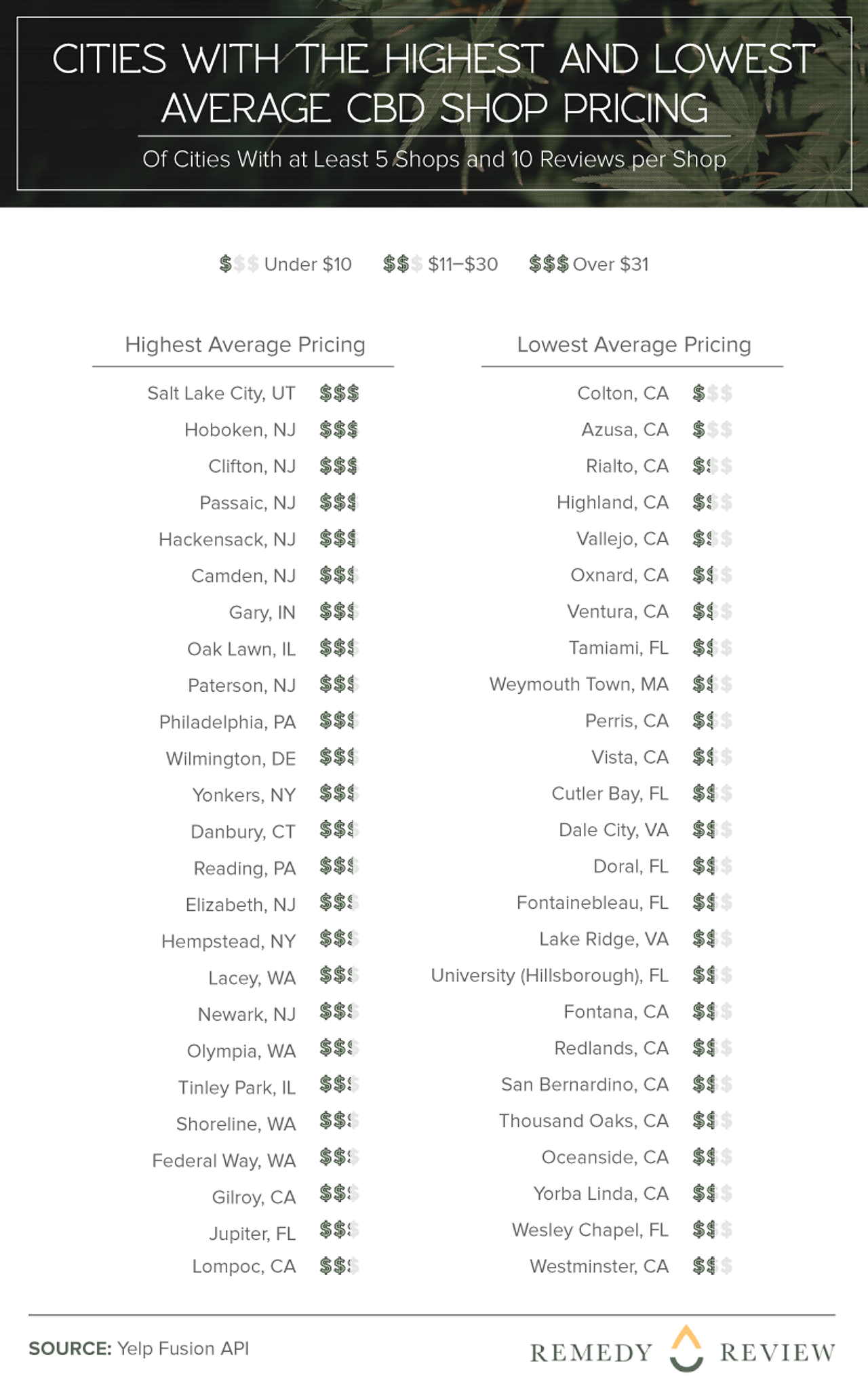 The price of legal marijuana is giving illegal pot a run for its money: In Colorado and Washington, for example, the availability of recreational weed led to a steep decrease in price post-2014. The same gram of pot that used to cost between $25 and $35 is as low as $8 in some cases, dipping below the price of black market products. So far, legalization seems to be a net positive for the cost of marijuana – so we wanted to know how that affected the price of CBD.

Colton, Azusa, Rialto, Vallejo, and Highland, California, were the five cities with the lowest average pricing for CBD.

On the flip side, New Jersey had a similarly homogenous claim to expensive CBD shops: Aside from Salt Lake City, Utah, five cities in New Jersey had the highest average pricing regarding CBD. Hoboken, Clifton, Passaic, Hackensack, and Camden crowded out other American cities as the most expensive places to purchase legal CBD.

While recreational marijuana has a long way to go before reaching a legal status in all 50 states, CBD is acting as a kind of trailblazer, with more and more dispensaries popping up from coast to coast. Florida distinguished itself as a prime purchasing location, sweeping the top three spots for the highest-rated CBD shops in the country.

When it came to the number of shops per capita, cities in California nabbed four of the top five rankings, with Littleton, Colorado, taking second place. Meanwhile, Texas proved to be one of the richest untapped markets around, racking up a generous handful of populous cities without CBD shops to call their own. Our research revealed that California was home to a number of hot spots for the price-conscious, while New Jersey CBD bore chart-topping price tags.

There is but one universal truth about this substance and its budding popularity: It’s not going anywhere and there still aren’t regulations. On a global scale, the hemp market is expected to reach a $10.6 billion valuation by 2025, equivalent to a 14-percent compound annual growth rate. Keep your eye on CBD – you’re watching history unfold.

We scraped Yelp business listings that appeared when searching “CBD” for a particular city on Sept. 6, 2018. We used Python and Yelp’s API to collect these data. Cities and their populations are based on the 1,000 most populous cities in America from the U.S. census.

Because of their proximity to one another, results from one city may appear in another.

Did your city rank high in average CBD shop rating? Do you want to make sure that the world knows of your cities greatness? Don’t hesitate to share the graphics from this page for any noncommercial use. Just make sure that you credit Remedy Review and link back to this page. 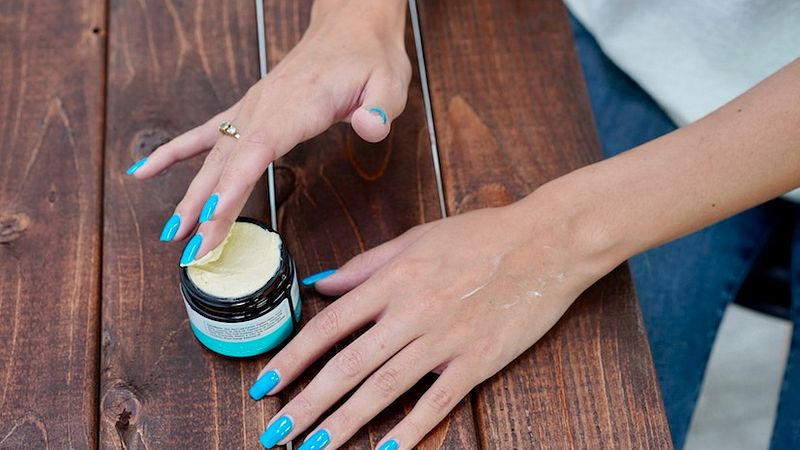 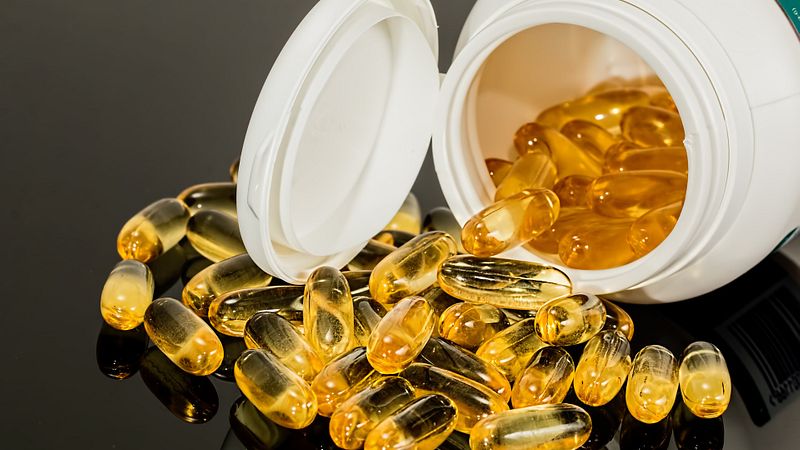 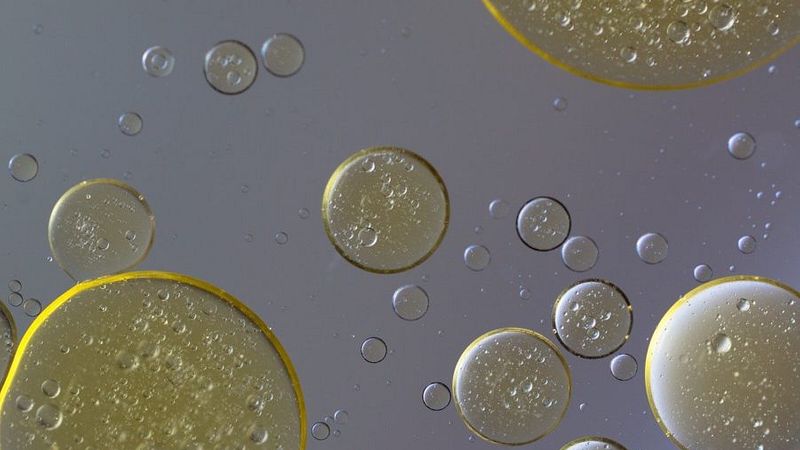