Home CBD Benefits Survey: The Effects of CBD on Sex and Relationships

Sex and CBD: How Can Cannabis Improve Sex

CBD, or cannabidiol, is experiencing a swift and widespread rise to substance stardom that is nearly impossible to ignore. This hemp-derived product is THC’s non-psychoactive cousin, and thanks to this difference, it is legal in a growing number of states–including locations that have yet to greenlight marijuana for recreational use.

Given the wide range of benefits attributed to the best CBD oils, it’s no wonder some people regard it as somewhat of a wonder drug: It has been known to help relieve chronic pain and ease depression and anxiety, for starters, alongside a number of other health upsides that are backed by budding research.

It was only a matter of time, of course, before the substance made its way into the bedroom. In fact, we’re at a point where you can shop around for an impressive selection of CBD-infused products created for sex.

Lotions and potions aside, though, we wanted to learn more about the many ways in which CBD consumption might improve people’s sex life.

Of the 5,398 Americans who initially signed up for our survey, 502 (9.3 percent) said they took CBD for sex with their current or previous sexual partner. With these answers as our guide, read on to find out how this breakout drug can quash bedroom worries, change the way we orgasm, and shape our overall sexual satisfaction.

Put simply, sex is fun. As humans, we’re hardwired to desire it–and boy, is it good for you. Engaging in the act can improve your life in many more ways than one, from boosting your immune system to releasing the happy-making chemical dopamine. So what’s everyone so nervous about?

For men, performance anxiety was the most common sexual concern, while women were most frequently bogged down by body image worries. Men also felt uneasy about reaching orgasm too soon (something that approximately 1 in 3 men will experience in their lifetime), whereas women were concerned that their worry would affect the enjoyment of their sexual experience.

However, even though men and women described different top-level bedroom concerns, the two sources of anxiety that were most effectively calmed by using CBD were identical: 66 percent of both male and female respondents said CBD helped them ease the feeling that their anxiety would inhibit them from enjoying sex. Another 61 percent of men and 57 percent of women said it helped with performance worries. 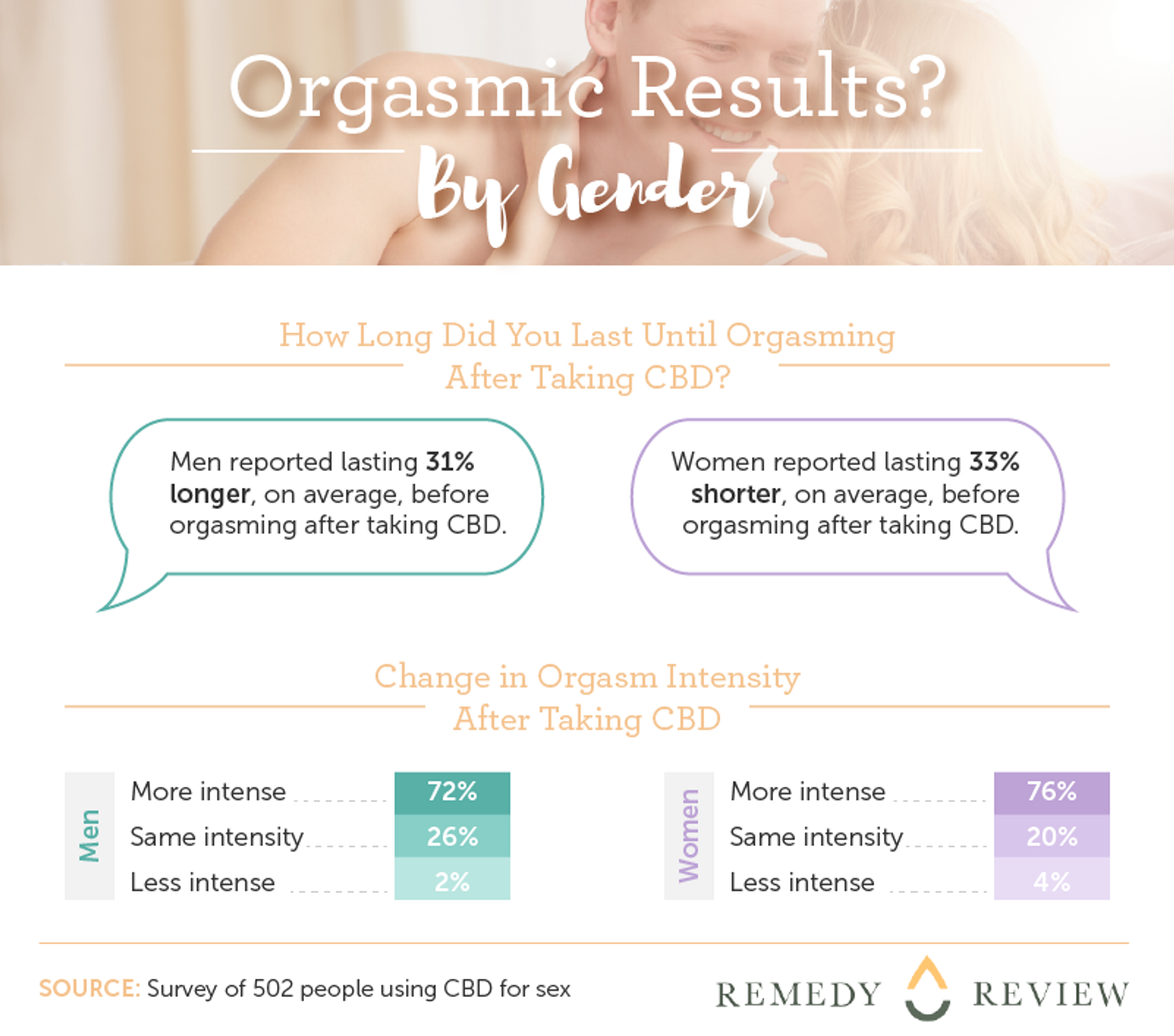 Whether you’re male, female, or otherwise, sex’s goal is largely the same for everyone: to achieve an earth-shattering orgasm. However, there is an important distinction between the male and female experience. While men are often concerned about finishing too early, many women often have the opposite problem: Between 10 and 40 percent experience either difficulty reaching or an inability to climax.

If you find yourself running into these extremely common issues, CBD might be the key to orgasmic optimization. After taking CBD, male respondents took an average of 31 percent longer to finish, while women finished 33 percent faster on average.

Taking CBD also ramped up the orgasmic intensity for both sexes: 72 percent of men and 76 percent of women said they experienced stronger orgasms post-consumption. Meanwhile, less than 5 percent of respondents reported having less intense orgasms after using CBD. 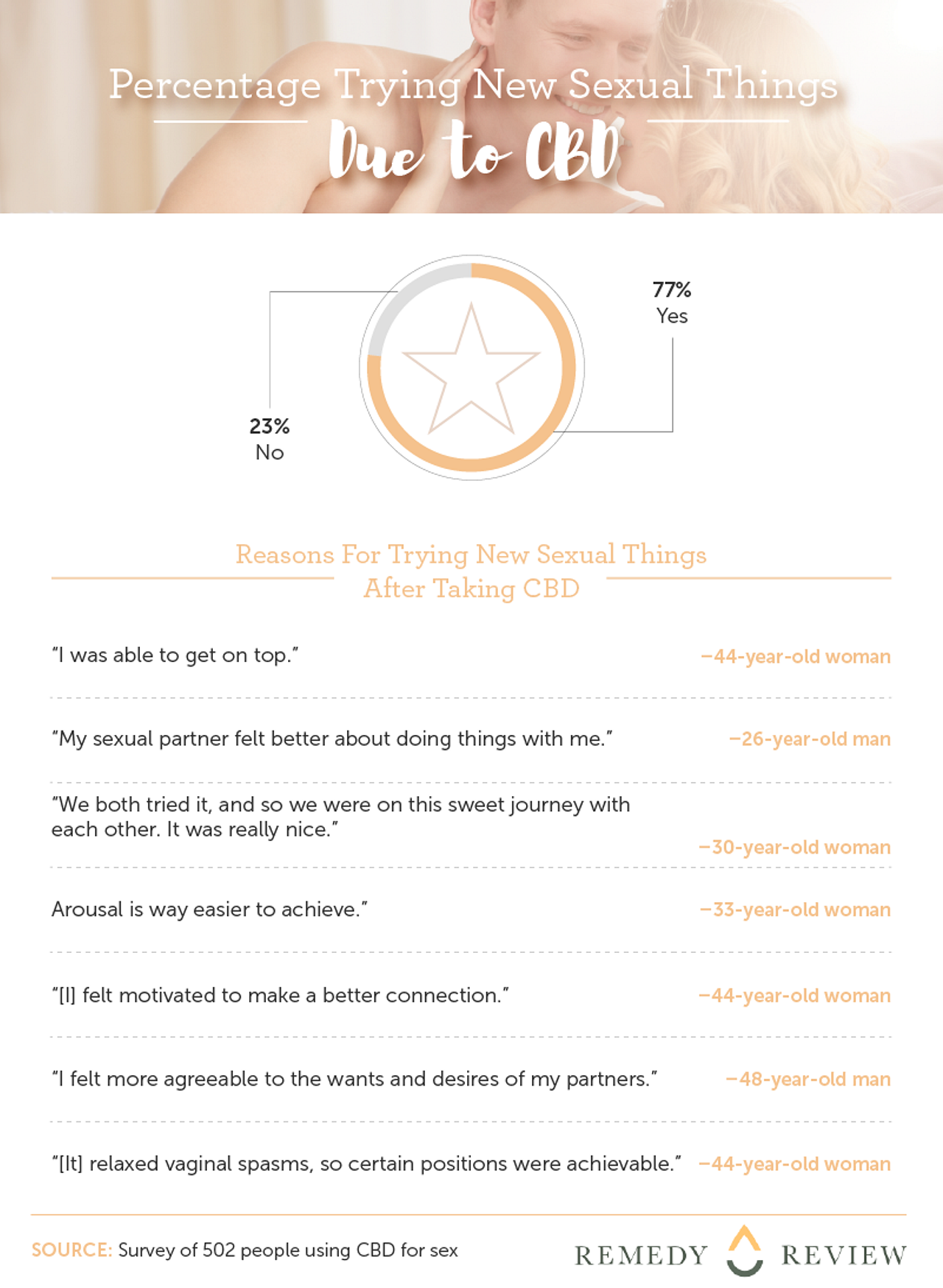 Sometimes, it takes a little extra push to try something new in the bedroom—and for 77 percent of respondents, CBD was the nudge they needed. From being more open-minded to mustering up the courage to get on top, our surveyed population enjoyed a little more freedom once CBD was brought into the picture. 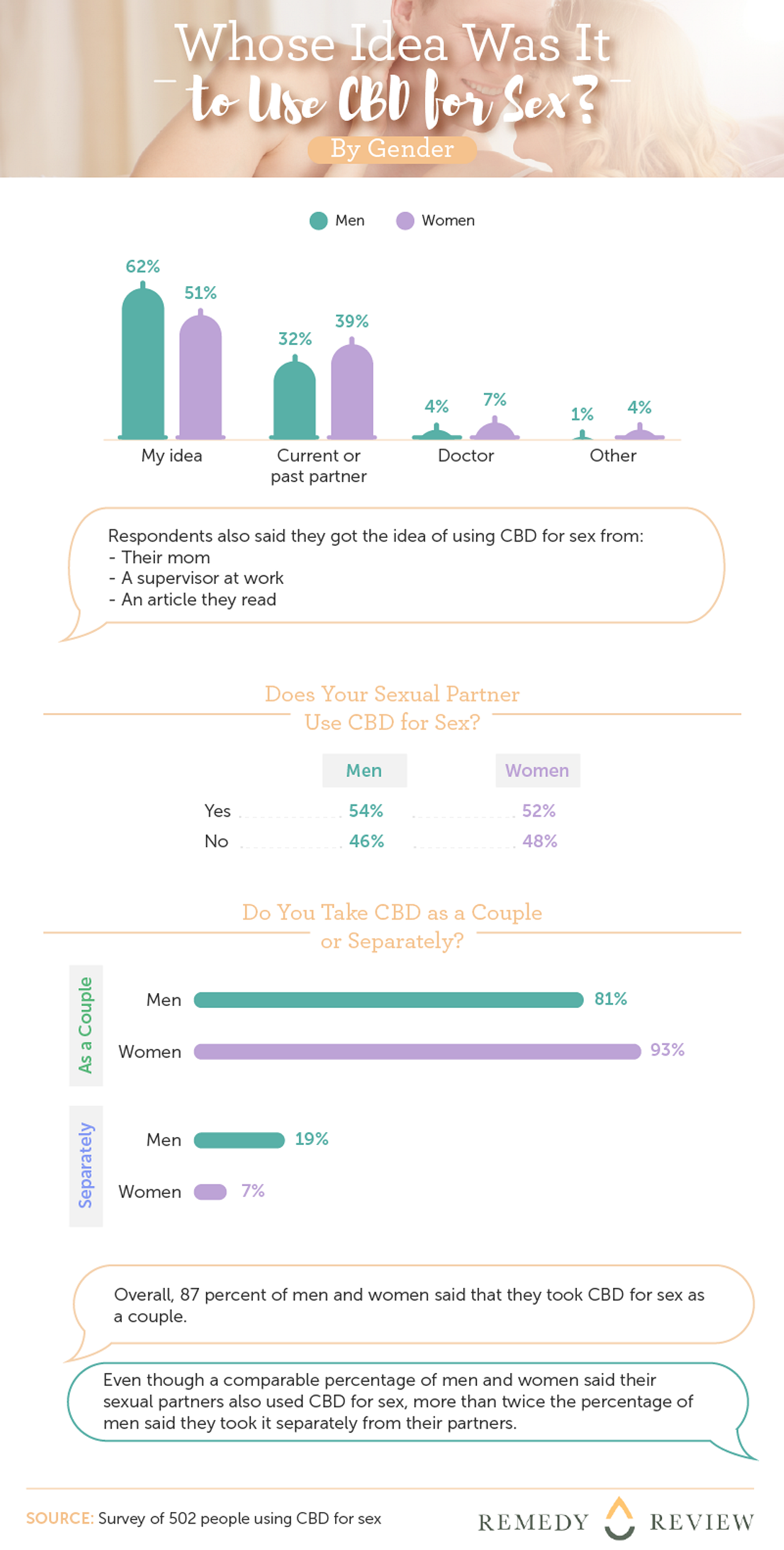 When it comes to changing up sexual routines, more often than not, one partner will suggest a new idea for their partner to consider. This got us wondering: Who broached the topic of trying CBD more frequently, men or women?

Sixty-two percent of male respondents reported it was their idea to use CBD for sex, compared to 51 percent of women. Meanwhile, 32 percent of men said it was their current or past partner who made the suggestion, while slightly more women–39 percent–also traced their first experience back to a partner.

A small number of both men and women (4 and 7 percent, respectively) said their doctor recommended CBD for sex. Here’s how to broach the conversation with your own GP.

Products To Get You In The Mood 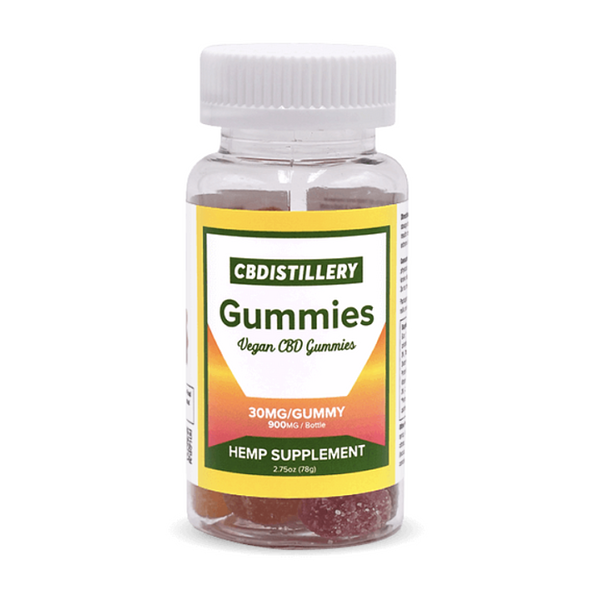 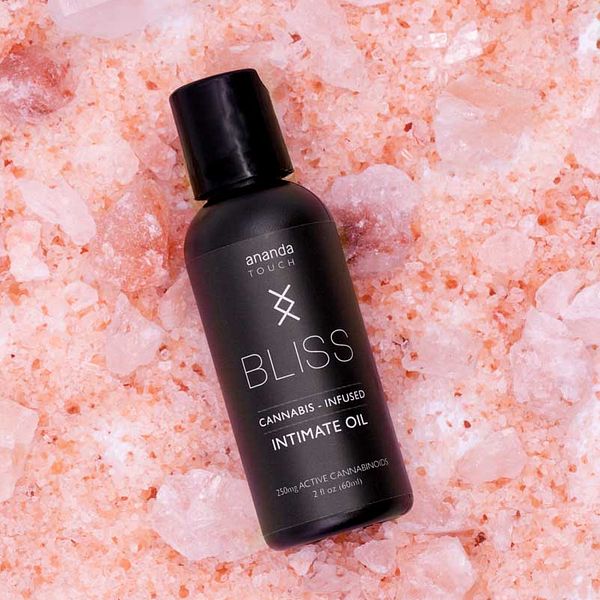 Use code REMEDY to get 20% off 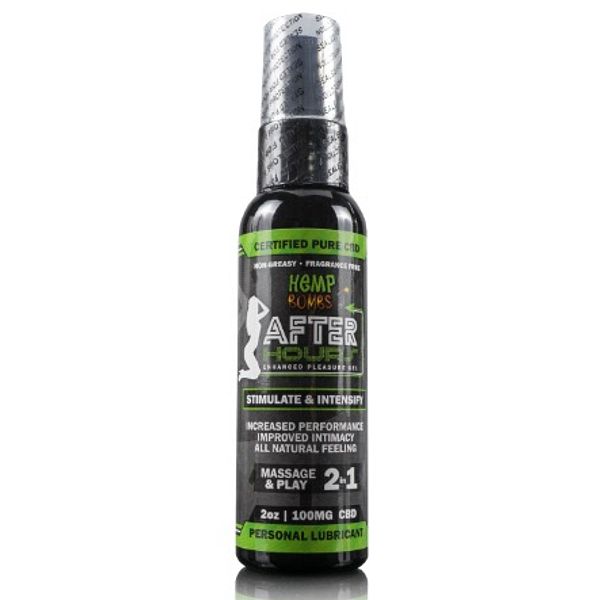 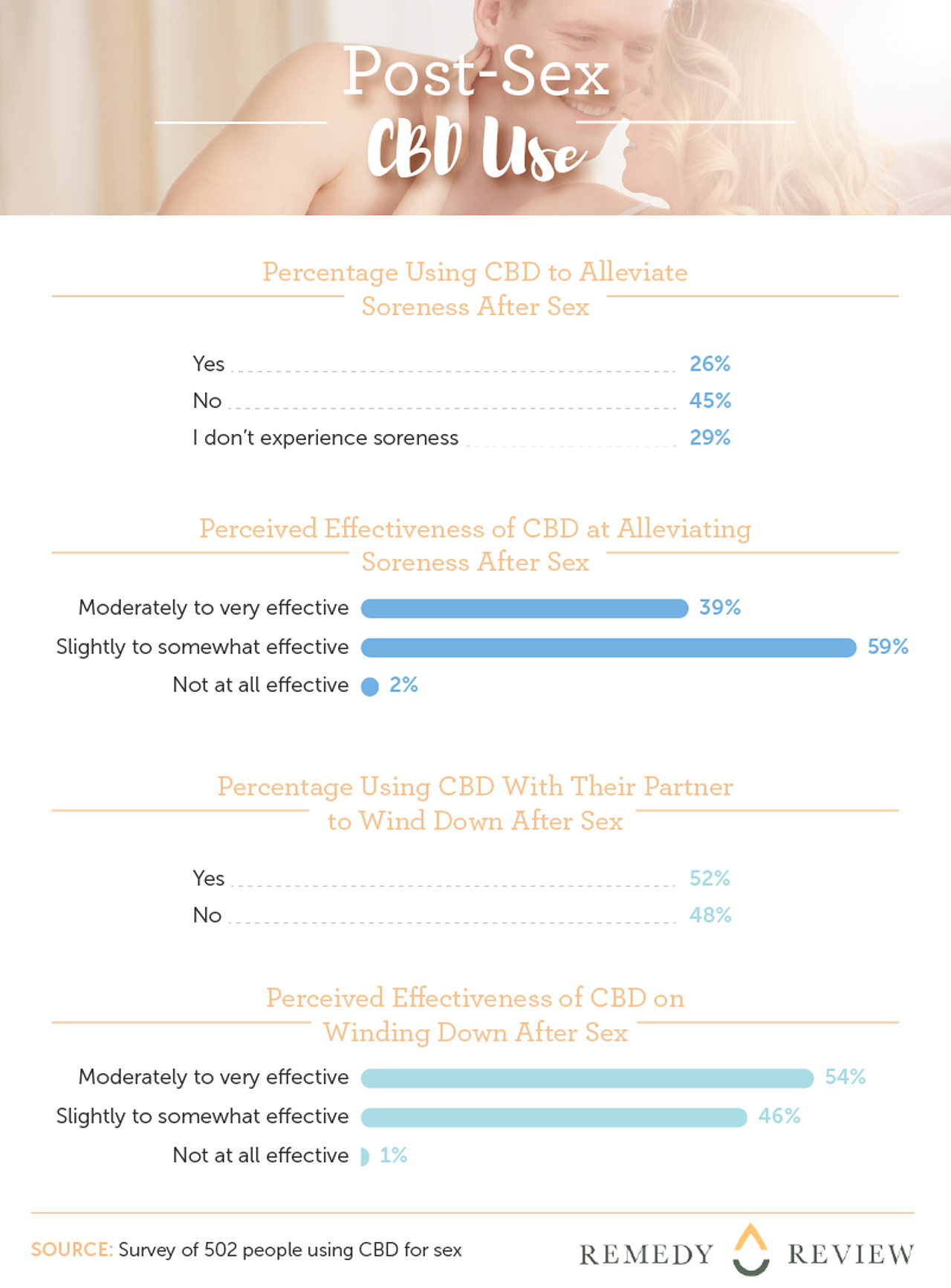 While having sex doesn’t quite provide enough exercise to replace an actual workout, you’re still burning calories. Throw in a few strength-testing positions, and it’s no wonder some people experience soreness after a session.

Just over a quarter of respondents reported feelings of post-sex soreness, almost all of whom experienced positive results when treating their discomfort with CBD: 39 percent said CBD was moderate to excellent at diminishing feelings of soreness, while 59 percent said it was slightly or somewhat effective. Just 2 percent said they felt no effect whatsoever.

Using CBD to re-up your physical condition is one thing–but it also has a lot of mental health benefits, particularly in the relaxation department. Fifty-two percent of respondents said they used CBD with their partner to wind down after sex, and over half those people reported that it was a highly effective way to do so. Just 1 percent felt it was ineffective. 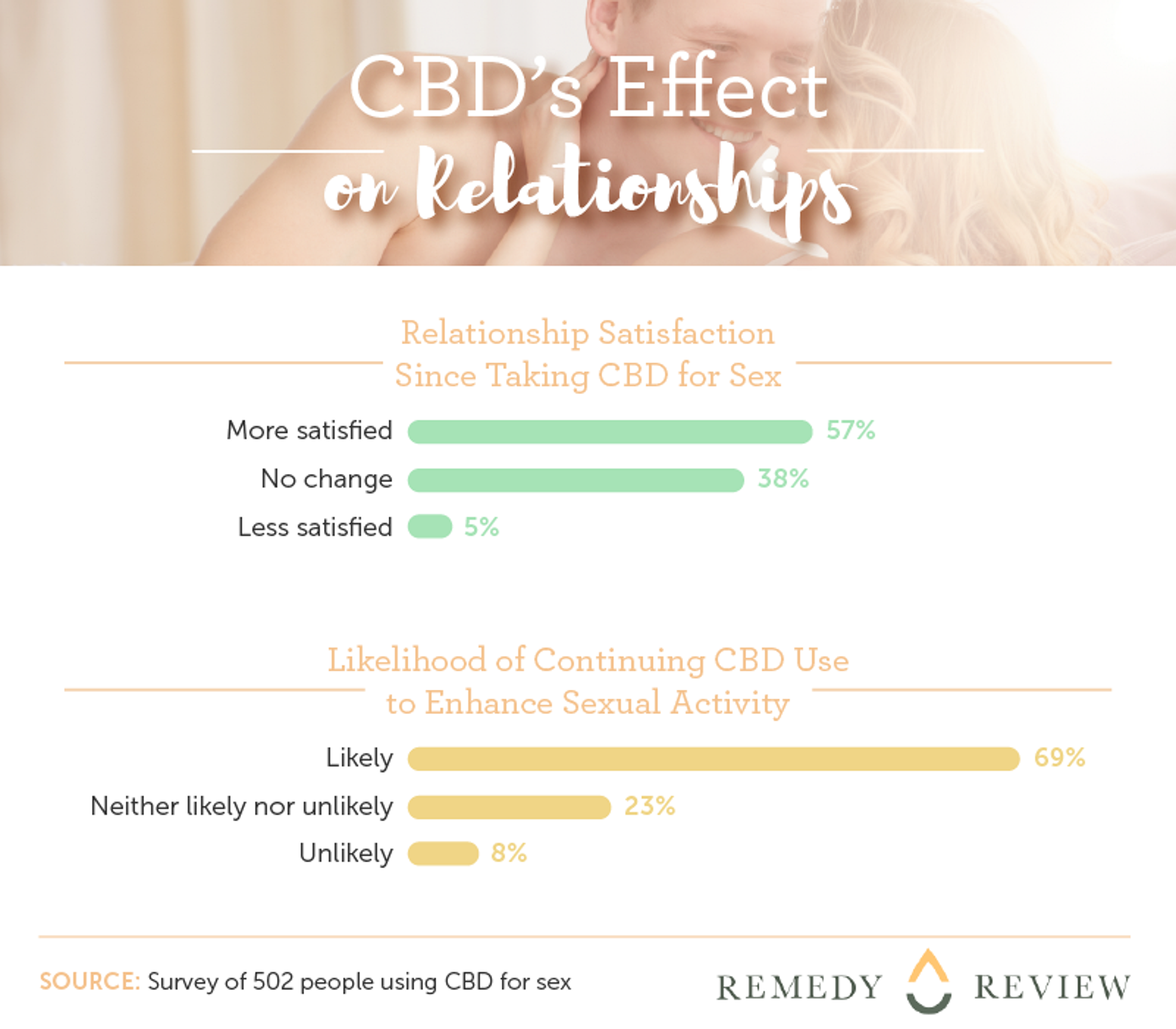 Achieving a healthy, balanced sexual relationship is an ongoing mission for countless couples. The good news: Many paths can lead to a fulfilling sex life, and according to our respondents, the use of CBD marked a big win for their intimacy.

Fifty-seven percent of our surveyed population said they were more satisfied with their relationship after bringing CBD into the bedroom, and an even higher number of people–to the tune of 69 percent–said they were likely to continue using it as an intimate enhancer.

Another 38 percent of respondents said they noticed no difference in their satisfaction levels as a result of CBD use, and just 5 percent reported being less satisfied than they were in their pre-CBD days.

CBD: Does It Belong in the Bedroom?

Body image gripes, performance anxiety, distracting thoughts that pull us away from intimate moments … according to our respondents, CBD was a great way to banish bedroom concerns and have more fun while getting down to business. It also had quite the knack for taking orgasms to the next level, while combating orgasm-related issues that burdened both genders (with CBD, men lasted longer, while women had an easier time finishing).

While women are more frequent CBD users overall, it was our male respondents who typically floated the idea of bringing the drug into the bedroom. And what an idea it was! Respondents reported overall promising results when using CBD as a treatment for post-sex soreness, as well as a tool to open their minds to new experiences. Not only were a majority of people more satisfied with their sexual relationship post-CBD, but also nearly three-quarters of people were planning on continuing with their consumption.

If these results have piqued your interest, but you’re not quite sure where to start your CBD journey, Remedy Review is your go-to resource to learn more about products, benefits, reviews, and so much more. Head over to Remedyreview.com for your all-access pass to the wonderful world of hemp, CBD, and beyond.

If respondents failed an attention-check question halfway through the survey, they were disqualified and excluded.

The data presented rely on the self-reported effects of using CBD on sex. Self-reported data come with inherent limitations, such as but not limited to telescoping, selective memory, and exaggeration. We can’t know how accurate our results are to reality. The data presented show our respondents’ perceptions of CBD’s effect on their sex life.

When asked about the efficacy of CBD in treating sexual anxieties, men and women were asked on slightly different scales. Men saw:

They say don’t kiss and tell. Well, feel free to tell your followers about the positive effects CBD has on sex. We just ask that it be for noncommercial purposes and that you link back to our research. Don’t keep all the bedroom secrets to yourself.